You are at:Home»The Widow Wears Pink»Starting A Charity: Hearts for Howie

A couple of years after Howie passed away, my girls came up with the idea of starting a charity in his name.

I knew NOTHING about starting a charity.

Plus I am not the Type A, super organized, go get ’em  kind of girl that most people I know are. I’m kinda laid back and a little all over the place sometimes. Funny – I used to try to be that super organized girl but it’s just not me. I have learned to embrace who I truly am.

Fortunately for me, most of my friends are that Type A personality, so I called in my troops. They were more than happy to help me get started on this – they love a project! They all knew and loved Howie so it was something we all felt good about.

The beginning was not that easy – Amanda and Lily and I decided to hold a meeting at our house to get started. I invited way to many people and it was a bit of a disaster.  So many different opinions and different personalities were not a good thing. Not much got accomplished and my girls were upset.

I decided to just keep my two most super organized friends for my “committee” and asked the others to help out with events once we got started. This worked much better.

We came up with the name “Hearts for Howie” and created the logo. 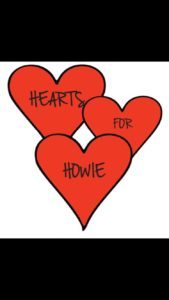 We had to come up with a new idea. One of my friends had done some work with a local hospital, St. Barnabas Medical Center, and had a contact there.  We met with her and this time the process was so much easier.  She would give us one project and we would raise money for that. She mentioned that the Cardiac Unit waiting room needed a total overhaul.  We took a look at it and it certainly did.

That was our project – we would raise money to create a new Cardiac Unit waiting room at St. Barnabas.

Now we needed to raise money. Others might do fundraising with some type of sporting event, walk-a-thon etc., but not the Feintuch girls! We are the three most unathletic girls on the planet so that would not really work well for us.  So we decided to do shopping events.

We did a few where vendors came and sold in my house.  We all advertised on Facebook, Instagram etc. and they were quite successful.

We also did one “Hearts for Howie Day” where we solicited a bunch of stores in town to donate a portion of their proceeds of the day to the charity. The stores were amazing to do this for us and we had a huge response to that day.

Then – I know I just said we are unathletic – but another St Barnabas charity invited us to team up and do spin events with them and we agreed (and all three of us did it!). These had an amazing turnout and were super successful.

Before we knew it we had raised the money for the waiting room. It is now beautifully updated with a plaque dedicating it to Howie. We are so proud of this.