You are at:Home»Relationships»Family»Study Reveals Camp Packing Now Lasts Longer than Camp Itself

Livingston, NJ (June 12, 2018) – In a study conducted by the American Association of Camping (AAC), it has been found that packing children’s duffel bags for the summer actually takes longer than the entire time the children are away.  In a survey of two thousand camp families in the northeast, nearly ninety percent replied that they spend well over seven weeks creating lists, buying clothing and supplies, and packing the bags.  Of the over seven weeks of prep, it was also concluded that a majority of the time is spent on complaining about the packing process, photographing the fully-packed bags, and posting photos of the bags on various social media platforms for all to admire almost two months of hard work.

The AAC has been tracking packing times since the mid 1980’s when most campers were equipped with a traditional black foot-locker trunk and an army-style duffel bag.  The trunks afforded families the luxury of sending up approximately 4.5 cubic feet worth of clothing, sporting equipment, and other camp necessities while the vomit green duffel bag with a Semitic name scrawled across it in permanent marker was typically stuffed full of bedding and both swim and bath towels.  Packing, which was normally done by the camper’s mother, only took several hours with little to no haggling about what to and not to bring. 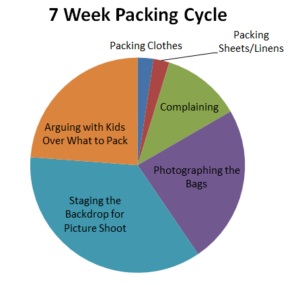 Today, most campers ship up two duffel bags containing a total 23 cubic feet of assorted crap and junk that most likely will either never be worn, lost within the first week, or packed again the following year in hopes of actually using the item.  With over double the packing capacity than thirty years prior, it is no surprise that the packing process now takes on a life of its own.  “In the 80’s, kids had to bring up very few things to camp in terms of clothes and items to entertain themselves.  Most campers’ wardrobes increased tenfold the second they stepped in their bunks by way of ‘sharing’ or ‘borrowing’ their bunkmates’ outfits,” explained Bonnie Kravitz of the AAC.  “For female campers, a certain Champion sweatshirt may have inconspicuously made the rounds among the bunk over a week and a half period and no one was the wiser.”

The study also found that there is almost a one to one ratio of packing time to weeks spent at camp.  The longer the children go away, the more time spent on getting them ready.  It is the main reason why Cindy Horseberger, 41, sends her daughters away for only three weeks.  “I pretty much spent March through the middle of June in our ‘Packing Room’ (the spare bedroom on the main floor) getting the girls ready for a full summer.  It probably took three years off my life between the stress and the constant trips back and forth to the nearest overpriced kids clothing store to pick up more unlicensed college apparel.”

This article originally appeared in The Daily Camp News

Steven lives in Randolph, New Jersey with his wife and two teenage children. When he’s not working, he spends much of his time coaching or watching his children play sports. He went to sleepaway camp for a long time and is now living vicariously through his children who are now loving it as much as he did.