You are at:Home»Lifestyle»Fitness»Second Act Fitness: How Many Miles Do I Have Left?

“My knee isn’t getting better; it was so cranky after I ran yesterday; it hurt all day,” I complained to Celeste the massage goddess as she dug into the side of my leg.

“Last year it was your hamstring. And the year before that it was your ankle,” she said calmly while manipulating my hip until tears splotched my face. “Don’t worry, you’ll be able to run and I’ll be here to pick up the pieces,” she said with her typical confidence. While she continued to work on me, I wondered how many more years of ‘picking up the pieces’ I have left.

When I ran my first Falmouth Road Race on Cape Cod twenty years ago, I don’t even remember training. I probably didn’t. I was fit enough, a few years out from giving birth to my girls, back in the gym and I was young. I had been a runner all of my life so I wasn’t worried about taking on a seven-mile challenge. The race was smaller in those days, probably close to 8,000 people (Sunday will be 12,800.) It was a hot August day and the course was incredibly challenging with rolling hills, sun-drenched miles on the beach and a monster climb at the finish. Even with all of these obstacles, I managed to finish with a time that qualified me for top 100 female status in the coming years. Later, as I tackled six Boston Marathons and several half marathons, Falmouth remained my favorite race. In 2000, my father came to watch me. It happened to be his last trip as he died six months later. I’ll never forget how proud he was, and how much he loved celebrating my accomplishment.

I was so driven in those days, and my body complied. Like everyone who trains for large athletic events such as marathons, I suffered physical setbacks. A bad ankle here, a bad hamstring there. The runners I knew back then wore their injuries like battle wounds. If you were not out for some time during training for some bodily mishap, then you were not really a runner. A lot can be said for this warrior mentality; running and competing made me stronger as a person. I was invincible and ageless. Even after I threw in the marathon towel, I always knew that I would run the Falmouth Road Race. Until I could no longer walk, I would be at that start line in Woods Hole.

A few summers ago, post 50, I wasn’t feeling like a running rock star. My plan was to bail at mile 4 and walk home. As I was making the turn to drop, a spin instructor, whose classes I took that summer at B/SPOKE Capehouse, tapped me on the shoulder. “Let’s go,” she said as if we had been running together since the start line. For the next three miles, Aly was my angel pulling me to the finish line. I made it by the skin of my teeth, all due to the love of another human. 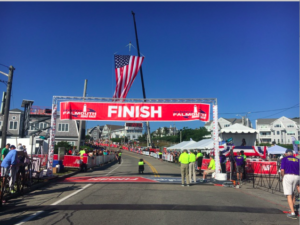 Working out and competing in athletic events are some of my favorite things; many people may call me fanatical about it because I incorporate activity into my life every day. For me, however, exercise is more than how it is defined in any dictionary. It is freedom. It fights the demons and the sadness. It is a way to connect with a community. It gives me life and hope and joy.

I wanted to tell Celeste as I lay on her massage table that I am not worried about this cranky knee as much as I am worried about how long I can keep this up. It’s a real fear that my temporary, bothersome condition of the summer will soon turn into a real issue that forces me to pass on lining up in Woods Hole at the start line with my people on one of the hottest days of a New England summer. How long can I pretend that I am still young and fast; how long will it be until I’m not a runner anymore?

The thing is, I am not ready to quit. I’m not ready to give up something that has meant so much to me for so long. Many of you reading this will say I don’t have a choice; that age and bodies breaking down are par for the course of life and growing old. You are all right; I don’t have a say in the matter. I can work out, eat right, take care of my body with massage and doctors, but in the end it is out of my control. I will be aging the way life intended me to be, and I will have to make peace with it.

But for my 20th Falmouth Road Race this Sunday, I will suit up. I will attach my number to the brand new tank I bought at the runner’s exposition, load up my music on my phone, use Body Glide and sunscreen, drink water, tape up my damn cranky knee and give it my best shot. No one can predict when my last one will be. And if this one is the end of the running line, I will make damn sure I gave it my all.