Last year, I wrote an article specifically for Option B, and was thrilled when it was published on their site.  I believe in what Sheryl Sandberg is doing, and I was thrilled to be a part of helping others.

I was not expecting what happened after that.

I received an email from a woman named Emma J Bell, telling me how she found me through my essay on Option B. She told me about a project she was working on, The Global Resilience Project. Her team was looking for “secrets to thriving” in the face of adversity. They were choosing 5o Thrivers from around the world who not only survived, but flourished in the face of adversity. She believed that I was one of them.

Was this for real? Yes, I lived through a tragedy, and yes, I guess I was thriving, but one of only 50 that they were considering? I didn’t see it.

Emma asked to do a Skype interview with me and I agreed. While talking with her (from Scotland!), she explained that they were searching for the reasons that some thrive while others fall apart in the face of adversity. She believed I had some qualities that helped me to help myself and that telling my story would benefit others.

At the end of our Skype interview, she told me that they were going around the world to do live interviews for the project and they wanted to make a stop in Livingston, NJ to interview me. While I was still shocked, I was also honored and thrilled that they had chosen me.

A couple of months later, Emma and her crew came to my house. I loved her from the minute she said hello (the accent made me love her even more). She was the warmest, most inviting and engaging woman I had ever met. I immediately understood why she had taken on this project; she truly wants to help others. Everything about her made it easy to open up and tell her my story.

So, I did. After we spoke for what seemed like minutes but was hours, Emma told me that a lot of the ways I described my own transition into a better place in my life was similar to her other “thrivers”. We all have similar “tools” to dealing with our struggles. This was what her research was all about. She was finding out why some thrived while others couldn’t.

While I wanted to have Emma and her husband stay for days to chat, she was off around the world to meet with the other 49 Thrivers.

I am honored and humbled to be mentioned in the same project as Emma’s other 49 choices. Their stories are incredible. The fact that my name is in the same book at theirs is bewildering, but I am so proud.

Please click to view a portion of my interview for The Global Resilience Project. While you are there, also view or read about some of the other “thrivers” – they are beyond inspirational. 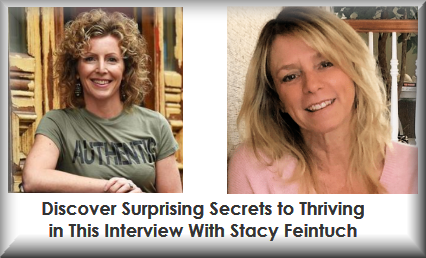