You are at:Home»Relationships»Friendship»My Friend With Breast Cancer Is A Different Kind Of Survivor
What do you think of when you hear the word survivor? I suppose it is a case specific question. There are the “I survived summer vacationers at the grocery store on July 4th weekend,” or “I survived a bachelorette weekend in Vegas with 50 of my closest gal pals.” We use the word survive in jest often, but what about the real survivors?
There seems to be a sliding scale depending on who you ask.
I met Nicole at my CrossFit gym. Over the last couple of years we have become friends. Our lives are somewhat parallel. We’re both single, independent, strong-willed women. We both have Hurricane Katrina rescue dogs which is just a cool extra fact. We’re both as dainty as silverback gorillas in a glass factory. We both have an obsessive love of animals. The list of similarities goes on from there with one difference. Nicole has breast cancer.

Nicole is a lieutenant of a local fire department and has ox-like strength. She takes diligent care of herself. Why would her body betray her? Nicole doesn’t ask these type of questions, she just pushes the BS aside and works hard on kicking cancer’s butt.

Nicole is anything but just a survivor. She is living. Out loud, I might add. She has no intention on being anything less than the bad ass we all know her to be. She’s bringing her friends and fellow gym rats along on her journey with Facebook posts and smiling pictures while getting chemotherapy. She is embracing what she knows she can’t control and doesn’t feel sorry for herself. Nicole isn’t turning inward or staying under the radar, rocking the devil out of her bald head. 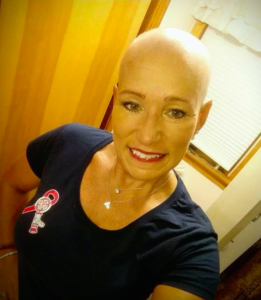 She still works out at CrossFit and is a joy to be around. Her support group is mammoth, which speaks volumes about her character.  Nicole is selfless, steadfast in her word and is the first one to help her coworkers, friends and community. She volunteers what little free time she has supporting Homeless for the Holidays. She pends a weekend as you would expect, homeless, living outside, immersing herself in conditions where countless homeless families are forced to live, all while raising money for that very charity. She’s also notorious for doing little things along the way, small gestures to let you know she is thinking about you. Nicole is good to the core. And she will be damned if she will allow cancer to take away from her what she so feverishly worked for.
We think we’re exempt. We think it’s not a diagnosis we will ever hear falling out of our own doctor’s mouth. We all know someone, love someone who has or had cancer. You can’t swing a dead cat without hitting someone who’s been affected. Ok, poor analogy but you get it. I’ve watched clients, friends and family fight through it. As a hair stylist, I have  shaved heads.  Each time I do, it feels like the “GI Jane” moment where Demi Moore joins the military and shaves her head and rolls her proverbial sleeves up to kick some ass. Only here, it’s Nicole. She’s ripped the sleeves OFF, shaved her head and proclaimed, “Not today mother fucker. Not any day”. She’s just one example of how people deal with this life changing diagnosis. Who the bloody you-know-what has time for cancer? I watch Nicole’s journey as she chronicles it on social media, and become inspired. I scheduled that mammogram I had been putting off because well, mammograms suck and they hurt and I have “better things to do with the 30 minutes it takes.” How smug and irresponsible, right?

I am not exempt and neither are you. Man, woman, boobs and balls. Get yourself checked. I hope to have a fraction of courage and fight in me that Any one person has should I ever be faced with such a circumstance. Take a page out of Nicole’s book and don’t just survive…..live loudly.