You are at:Home»Relationships»Family»Thankful For My Family This Holiday Season

After Halloween, you might as well put up your Christmas tree, light the menorah, and cue up the Mariah Carey Christmas album and settle in for the next five weeks because here it comes. The “season”. I feel bad for Thanksgiving as tho it’s the middle child of the fall holidays.

“WOOHOO! HALLOWEEN!! Blah blah blah Thanksgivashit, CHRISTMAAAAAAAAAAS!!” Being a middle child myself, this is not a reflection of me.

I love holidays, mostly because I love hearing everyone’s traditions. When I say traditions, I mean the shit shows that go down at the family tables. I like the humor. I mean none of this in a negative light. In fact, I find my own family to be comprised of a some comical people. My mother being one of them, only she doesn’t know she’s funny. As far back as I can remember, that woman can “cook and prepare” herself right into a cranky mood. It’s temporary, but the stress level she reaches is entirely too intense. I didn’t inherit a fiber of her organizational and multitasking skills, so I can’t see what the hype is about. You come to my house, you’re getting a Falmouth Road Race mug to for your spiked cider. I have like six forks so I can’t have more than six guests.

I love to watch Mom aka Sheila prepping for a holiday. She never fails in the decorations, including herself with her holiday sweater and her apron with a turkey on it that has blinking lights. So it’s funny to me when this little person is curling her upper lip, wielding an electric knife, and telling me to go do something useful while she puts olives in the olive tray she’s had since 1976 (knowing full well those olives are going to end up on my finger tips which makes her mad.) 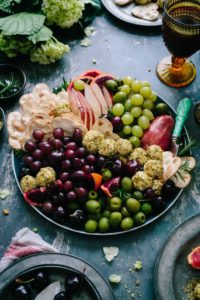 Sheila has her shit together. She likes to do all this stuff her way. She hates people under her nose. I’ve developed a system over the years where I’m the daughter who lives far away and isn’t domesticated so I somehow evolved into the child who doesn’t have to make or bring anything. My sisters have husbands and families and that’s what wives and moms do. So I deliberately make myself a nuisance in the kitchen by lifting lids on pots and being in the way. My mother then banishes me to the living room with the men and I sit and eat olives, shrimp and cheese and crackers until I’m sick. For years, my grandfather would ask me to make him a highball. He didn’t care that booze is poison to me, He just knew I made his highball with way more whiskey than water, as opposed to my mother’s safe watered-down version. 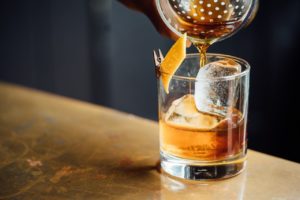 We are not a Hallmark Channel Holiday Special kind of family. I think we’re better and far more fun. We are not traditional in the sense that we arrive to the host house in our best outfits, throw an apron on and help mom bake pies, and have grown up conversations about global warming or economics. We show up in fat pants that have stable elasticity, and unwashed hair, go in the kitchen and snack on whatever is meant to be put out for guests. Our conversations revolve around the Patriots, flatulence and why my father still drinks Schlitz. You know, compelling shit. One of us is louder than the next and there’s definitely an argument over the course of the day — could be over who took the last crescent roll or what sister is doing more manual labor than the other.

Whatever your holiday traditions are, take at least one moment out of the chaos to look around you and be grateful. My youngest niece, who is now 13, insisted from a very early age, that we go around the table and say what we are grateful for. She takes this exercise very seriously and expects nothing less from the rest of her goofy family. We are all thankful for something. There is a lesson, a gift and a blessing each time you sit around a table with people you love. Those are your people and instead of hemming and hawing, instead of nitpicking and eye rolling, encourage you to be kind, happy and remember why you’re there. To be thankful.