You are at:Home»Relationships»Loss»Interview With Dr. Jennifer Ashton – Life After Suicide 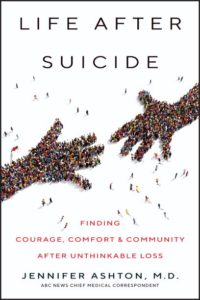 After Robert committed suicide, you have said that you suffered in private. Why were you hesitant to speak about it in the beginning?

I think there are three reasons.

One is that my first and primary focus is my kids. They were 17 and 18 at the time and every little thing I did was with their well-being in mind: how I went back to work, when I went back to work. They are, as any solo parent knows, my sole focus. I didn’t want to bring any more attention to us than already had been brought because this was a national story.

The second reason is that I, as a physician and a healer, am much more comfortable helping someone else through their pain than having someone help me through mine.

The final reason is that I didn’t think anyone would be so interested in my experience because I know that everyone has their own stuff to deal with.

You have said that the suicide of Kate Spade was what gave you the push to go public with your own story and write Life After Suicide. Why was this the trigger for you?

It wasn’t until the Kate Spade story that I did speak publicly to George Stephanopoulos on Good Morning America (GMA) about it. The response was so massively powerful and overwhelming to me. It was my kids that said to me “Mom, you need to talk about this. You can help so many people.” They were so smart and courageous and I listened to them. It gave me the boost I needed to do it.

How are your kids doing now?

Thank God, they are doing really, really well now. But, as their mother, I worry about them every day. I also feel deep in the core of my being that they are doing so well because they made a conscious and subconscious decision to live in a way that honors Rob’s spirit. In everything they do, they think to themselves, “Would Dad like this? Would this make Dad proud?” They are healthy and happy, but that’s not to say that they don’t have their sad  or hard times. They do and they always miss him.

I have found therapy a very helpful tool for me and my daughters. Do you and your children see a therapist? If so, how has it helped?

We have a great therapist that we see and talk to both individually and together. I have told my kids that this will be a part of the rest of our lives, so they are really plugged into that. There is not even a way for me to describe how essential it has been for all three of us. I constantly ask my therapist, “Is what I am thinking, how I am behaving, what I am feeling normal?” To have someone who is an experienced mental health professional help interpret life after something like this is everything.

I know that you promote exercise for a healthy body. One of our writers at Living the Second Act recently wrote how exercise helped her through her grief. Do you find that exercise helps the mind as well as the body? Is this something that has helped you?

For me, it was massively important. In the six weeks after Rob’s death, exercise was the only time I didn’t feel numb. I think it has always been a way I have dealt with stress, but this was obviously a magnitude of shock that I had never experienced before, so it was even more essential. Grief and shock take a huge toll on your body. I lost nine pounds in a week. I couldn’t sleep. As a doctor, I was scared for my physical well-being. I was scared because I was now the only parent.

The “only parent” thought is a scary one…

Whether we lose a spouse from suicide, an accident, a heart attack, cancer, or anything else, we are all in the same position. Being a solo parent is very different from being a single parent. Our kids do not have another parent. It’s not the same as just not being married to your spouse anymore. So the pressure I felt, and still feel, to stick around was something that jolted me back into getting control of my health. It was really scary. It was really, really scary.

Your book shares stories of other survivors of suicide. How did you find these survivors and were they at all hesitant to open up to you?

That’s a great question. So, some of them I knew, some of them came from telling people I knew about the book. They would say, “Oh, you should speak to so and so…” The fact that suicide has affected so many people is incredible and sad at the same time. Some of the stories are from celebrities or national stories. Other ones are from people who contacted me through my office when they heard about Rob’s death. I was unable to read the emails at first because it was too difficult, but I saved them. When I felt like I was emotionally ready, I went through them one by one. I reached out to many of these people for the book.

And hearing their stories, did that help you?:

Massively. That’s what I think the power of this book is. It’s by far not the final word in grief and tragedy and healing, but I hope it’s part of a bigger discussion and dialogue. It helped me – I spoke to a mom whose son had taken his life only two weeks before she spoke to me, I spoke to a woman whose husband took his own life thirty years ago, and scenarios in between. One of the goals that I feel like I accomplished with this book is, like the subtitle says, comfort, courage and community. Almost every story has such a bright, positive, encouraging, loving part of how that person, the survivor, has been able to honor the spirit and memory of the person that died.

That is not to say that anyone in the book would say it was worth it, because it’s not. It’s just that they all had the choice to allow the tragedy to make them bitter and angry at the world and at life or to honor that person’s memory and spirit and to look at life in a more positive way.

I was watching you on GMA the other day when you were talking about a new drug, the nasal spray Eskatamine, to treat depression, treatment-resistant depression in particular. What is your opinion on this drug?

It is actually a very old drug that has had other uses. It has been researched for a while for PTSD and treatment-resistant depression. It was used mostly in IV-form for research. Now, with this FDA approval, it is being used in the form of nasal spray. I think that there is cautious optimism on the world of psychiatry because there hasn’t been an FDA approved drug for treatment-resistant depression for 30 years. But this drug will require medical observation for a period of time after it’s given. It does have a black box warning so you are not going to be able to pick it up at your local pharmacy. But for some people it can work as quickly as two days whereas typical SSRIs can take three weeks to work.

Our magazine is called Living the Second Act. Do you think you are going to have a second act?

Yes, definitely. I was 47 when this happened. I hope I live until I’m 94. But I was already wondering what my second act would be because Rob and I had just had an amicable divorce. We lived across the street from each other, we were still very close, we were texting the day before he died. We just didn’t want to be married to each other anymore.

When his suicide happened it just destroyed so much of my heart and soul, and as I put it back together, the best way I can describe it is that I feel much stronger than I have ever been but also much weaker. The analogy that I give in the book is that I feel like a plate that was shattered into a million pieces. When I had to glue it back together again, I had to glue back all the pieces, even the ugly ones, the irregularly-shaped ones, the ones that I had tried not to acknowledge. So this plate is glued back together stronger, but also weaker.

My second act is going to be framed with that. This has absolutely colored my relationships. I don’t have room in my life for a relationship that I don’t think is a beautiful one. Life is too short. I am more appreciative of the relationships I have now. Especially the ones with my children.

I didn’t realize how helpful it would be for me to hear other people’s stories. I also know it was helpful for those who shared their stories. This is where I believe blogs and sites like yours can be really helpful for people. They give them a community where they can say, “This is what I went through. This is what I’m feeling. Does anyone else? Does this resonate with anyone?” Our goal is to help as many people as possible.