You are at:Home»Relationships»Family»When My Daughter Got a Memorial Tattoo for her Dad

“I want a tattoo”

That was the statement made to me four years ago by my then 16 year-old daughter.

I looked at her like she was crazy. Uh – no. Not happening. No child of mine was going to have a tattoo. Tattoos were for bikers, not my beautiful red-headed sweet girl.

I said these very things to her and she stormed off, mad at me.

She came to me again at some point and pleaded her case further, believing that the tattoo she wanted and the reasoning behind it would soften me. Her dad died when she was 12. What she was proposing was a small tattoo, on the inside of her arm, of his very recognizable signature (he had the worst handwriting).

Of course I softened. This was not just any tattoo. She wanted a piece of her father with her. It was so sweet.

But still, no. She was 16. She was too young to make a decision like that, one that would stay with her for the rest of her life.

She informed me that someone told her she should take a picture of the tattoo she wanted and then look at it every day for a year. If she still loved it, that meant she should get it.

Yea, ok. Sure, try that. She was never going to do it. She would look at it for two weeks and then forget all about it.

I was wrong. She did not forget. One year later, at 17, she informed me that she still loved it and wanted to know if I would now give her permission.

No – still too young.

When she turned 18, she not only still wanted it, but she also let me know that she was now “legal” and no longer needed my permission. I understood that, but I informed her that I was still against it. I know my daughter, and I knew that she would not do anything permanent like that without my permission. I was right – she waited.

The following year was a difficult one. She was unhappy at the college she chose and left there, took a semester off, and then began at a new school the following semester. She was just settling in and finding her place when the tattoo subject came up once again.

This time I pleaded exhaustion. It had been a very rough few months for both of us emotionally and I did not need anything new to deal with. She did not put up a fight. She knows when I am at my breaking point.

Which brings me to this year. She was turning twenty. She had wanted this for four years. During those years she had grown a lot, and honestly, so have I.

I know that she is who she is, and that this truly meant a lot to her.

My view on tattoos has also changed a bit. I had to pull myself out of the 80s when I was growing up, and into the present. Tattoos are not just for bikers. I see them everywhere – on kids her age and in their 20s, and they are becoming more common on moms just like me. They have definitely grown on me.

It was time. I held my breath and said yes. She could get a tattoo with my permission and I would go with her to do it.

I asked around to find a recommended place. When we walked in, I was pleased to see that it was very clean and actually kinda cool. She gave the tattoo artist the signature and he traced and then transferred it to her arm. She squeezed my hand while it was done but said that it was not too painful.

Being with her while getting the tattoo was not the hardest part for me. What was more difficult was hearing the fallout from the grandmothers. That is a generation who really doesn’t get tattoos.

Her dad’s signature is with her forever. I believe it truly gives her comfort and that makes me happy.

Now, her younger sister is saying she wants one. She also needs to be sure so I told her to also wait until she is 20. That will give me two years to recover before doing it all over again. 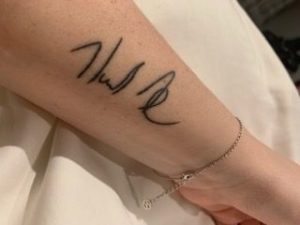