You are at:Home»Relationships»Family»The Struggle Coming From Abject Poverty

I watched her tonight with her purple hair with its brown roots clumsily crammed on the top of her head in a messy bun. Her thin perfectly manicured eyebrows. She was wearing a pair of raggedy sweats. One leg tucked into a boot and the other leg pulled up with its elastic band to her knee. Did she even know?

I have no doubt she is kind and loving and smart and can have a wonderful future, if she will just fight to find the opportunities that await her.

Her partner, maybe a boyfriend, maybe her husband, was directly in front of me in line, his wool wannabe coat covered in coarse white dog hair, his close shaved scalp probably didn’t lend any warmth on this cold winter evening. He seemed uncomfortable as she continued to place her items on the counter, some she had to “pass on”, I watched her try to engage him in conversation and him not even acknowledge her. He was embarrassed or perhaps apathetic.

They are poor, or at least she comes from poor. She was purchasing items for their home, it was all tacky and lacked any sort of style. The items she put back were clothes, which perhaps she needed more than the pictures and candles and the picnic basket with its red gingham napkin. Anything to cheer herself up, anything to make her feel like she is living a real life, all grown up.

I sat there in line for what felt like eternity and all the while I was creating her character and forming this story in my head all wrapped up in words of my own past.

I was 16 when I rented my first house. Adorable little thing it was, or at least to someone who faced homelessness just months earlier. I remember the laundry room not only held the washer and dryer but the refrigerator as well.

In a way it was quaint and certainly suggested that a poor and tasteless inexperienced teenager was occupying its space. It was built of brick that had been painted grey and sat at the back of a very large yard. I had distasteful little ceramic clowns and kittens from the Bradford Exchange perfectly positioned on my 1970s end tables. This was 1985.

In the small and bright bathroom above the toilet I had a nice little sign on college ruled paper that read Please Close The Lid, this of course was written in colored pencils. I made this sign because we had a curious water loving kitten and we tended to have a lot of drunk guests on the weekends, after all I was a teenager with a house and a new husband that was over 21 so we had a lot of parties.

My point is, I was once that poor girl trying to make a home, playing house to avoid homelessness with a man that would soon abuse me and terrorize me, but just a little, nothing like what I had already witnessed and would later live through. I was the girl that came from abject poverty, severe neglect and mild abuse that just wanted to live a normal life at 16 and buy frivolous meaningless things to feel grown up and real, those things happened to be little bright clowns and muted colored kittens.

I was a wounded and frightened child trying to live an adult life.

After a year I wanted to have a baby, after all when you are finishing up your last year in high school, and a successful year at that, and you have outgrown the party scene, the next logical step would be to start a family.

Never mind the neglect and abuse of an alcoholic husband, the lack of family and decent caring friends. Never-mind the possibility of community college, since there was no way in hell I could get into IU, never mind a job that could lend some real world experience or even the personal quest for a different sort of life.

I was still a child but I just knew if I had a baby my life would finally have some meaning.

I didn’t have a baby with that man and the marriage ended after a few turbulent years and I was left with nothing but stories to write, just like I had started.

I met a man that I fell deeply in love with, a man that I trusted with my life, he was everything I wanted to be, or so I thought. I married him just months after meeting him. The need to have a baby and be the mother that I never had, grew heavy on my heart. We were irresponsible with our future and after 18 months or so we had the most beautiful baby girl.

Our lives were painful and sweet and the love that swelled in my heart made me choose to be a better person. His career always outranked our family needs, our emotional well -being, yet I bent because who was I to have an opinion as long as I was safe and secure?

A few years later we welcomed another bundle of joy, and lived through more pain and more sweetness. Those children were everything to me. The love for a child is nothing like I have ever known. I had no experience with what a family was supposed to look like, or how we were supposed to love, but we went with what we knew.

Unfortunately, the dysfunction, the disappointment, the sheer ignorance and pride ended a twenty year marriage. The years since the divorce I have discovered myself, or better yet, I am repurposed to be the authentic me. I proudly stand in my truth, trying to enjoy my journey, knowing that the landscape of my canvas constantly changes, but I can say that I am stable, healthy and always growing.

There is a cycle for people with my history and it will continue to run our lives if we do not find a way to change the trajectory of who we have been made to be and discover who we are meant to be. 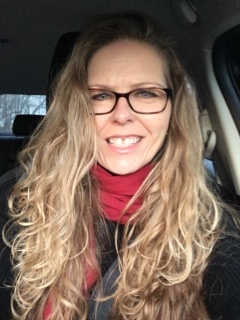 I am a perpetual child, full of curiosity and wonder.  Lover of words, music, books and a good cup of coffee. I am a never ending self- help seeker, a moon gazer, a crystal packing Reiki Master, a wanna- be healer,known to bake a scrumptious pumpkin cream cheese muffin,and craft maker to the re-gifters. Some days I want to save the world, other days I just want to eat coconut shrimp. Every day I am a soul rocker, lover of nature and the color pink. Most importantly, I am the Momma of two amazing human beings.