You are at:Home»Relationships»Loss»An Ode To The Mom I Lost

Mother’s Day should be every day. It is every day if you have the “right” Mom. I had the right Mom, I mean I still do but our relationship has changed.

She gave me the gift of life in the winter of 1966 and I was fortunate enough to return the favor in 1995.

She needed a kidney and I was a match. It was as simple as that. The complicated part of taking a young healthy 28-year-old woman with a 2 year-old child and subjecting her to 7 hour surgery with no guaranteed outcome was put on the back burner because the truth is that in 1995 we were looking at Mother’s Day becoming obsolete for our family. A reality that I, nor my sister or our husbands were willing to face. Even my father, my mother’s ex-husband, was willing to donate his kidney but the doctors wouldn’t allow it.

My mom was extraordinary. She had a list of living donors willing to part with their organ just so she could live. In 1995 all that altruism and charity was frowned upon. Doctors would never think of taking something from someone that wasn’t a genetic link. Thankfully we have come a long way since the 90s and now you can pay it forward and donate your organs as you wish.

My car license plate says GR8FLL and it also says donate LIFE pass it on.

Thanks to my mother I am grateful everyday and although I do have a big love for Jerry Garcia, the Dead and dancing bears; the roots and foundation of my appreciation and generosity all stem from a beautiful, fiery, 5 foot 3 inch red head with piercing blue eyes and a smile that lit up any room she was in. 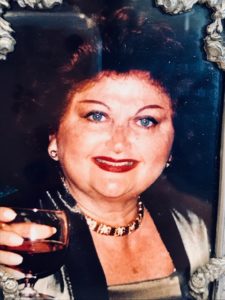 My mom was fierce, smart, balls to the wall, no nonsense renaissance woman.

She had strength, character and class and if you were in her circle, you were blessed. She had friends everywhere, all over the world. She spoke many languages and traveled to every continent. She went to the theatre, the opera, the symphony, the ballet and that always after a full day of work. She ate everything, even the things she wasn’t supposed to. She worked hard, played harder and enjoyed every single moment.

She was a mother and a wife, a sister, an aunt, an ex-wife. A business owner, a friend, a confidant and her most important role, one that she excelled in was that of being Nana. If you ask any of her 5 jewels, for that is how she referred to them, they can each tell you how amazing she was and how they were her favorite. She had the gift to give them all the love they needed from her. They got her undivided attention and she in return had loyal subjects.

She did not complain, she never said, “why me?” She didn’t burden anyone with her disease and she always made sure she was in control of it rather than letting it control her.

I miss my mother everyday. More so in May and especially since everywhere I go I am reminded that Mother’s Day is coming. Truth be told it’s always mother’s day for me. I don’t stop being a mom because I lost mine. I don’t stop talking to her because she’s not physically here. The relationship continues, it’s just taken a different path.

My mother instilled a foundation for my sister and me paved with resilience and strength laced with fortitude and grace and that is something that I am grateful for everyday. And although I can’t lie and say it doesn’t sting a bit to be surrounded by friends that have their moms, I do cherish every moment that we had. And boy did we have moments!

I hope that everyone enjoys their mom this Sunday, whether near or far. I also hope you can take time to reflect on something that you’ve gained from the gift that was given to you by the person that gave you life, and be grateful for it.

Randi is a freelance writer at The Write Thing to Say. She is a consultant for the Lustgarten Foundation for Pancreatic Cancer Research. She is a living donor. She is also a lawyer, a canasta teacher, a bridge student and most importantly a Mom. She consults, counsels and writes for anyone and everyone on most everything. Toasts, Roasts, Marriages, Divorces, New Homes, Old houses, Mitzvahs, Funerals and College essays and applications…she’s played a part in them all. She hopes to write a book one day too!