You are at:Home»Relationships»Family»Cooking With Mom: 101

As the mother of three sons, I know all too well what it feels like to be the Odd Woman Out. The one who isn’t doing the NFL drafts, or attending all the father-son events, or playing basketball on the driveway (believe me, I’ve tried, no one wants to see that).

So when my son was nearing his return to college for his sophomore year, preparing to live in an apartment without a meal plan, I seized the carrot dangling in front of me. I told him I was going to teach him to cook. He didn’t have a real interest in it and I didn’t care.

He was going to learn to make healthy, delicious meals, and to live within a budget (I’m not funding a school year’s worth of Uber Eats and Grub Hub!).

The plan for my ulterior motive of spending time with him, in my territory–the kitchen–was hatched: Cooking with Mom 101.

We started out small: meat sauce; not the kind where you painstakingly develop a soffrito to flavor the base, but rather the realistic kind, where you brown ground meat, add a jar of sauce, and simmer. For some reason, he found this complex. I taught him the importance of seasoning each layer any time you cook, and the option of adding dried fennel to ground meat, and breaking up the beef with a potato masher.

For the same meal, I taught him how to make pasta, how to reserve pasta water to thicken a sauce, and the importance of salting the water to flavor the pasta. We also made garlic bread, and roasted vegetables, carefully watching and baking and broiling at periodic intervals, until achieving the perfect shades of golden brown. 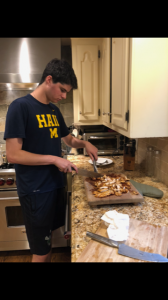 Our time cooking together in the kitchen continued over the next several weeks.

We triumphed over schnitzel, varying it three different ways; panko, flavored breadcrumbs, and adding dried chives to the beaten egg. For some reason, he found this lesson the easiest. Yes, I am working on figuring him out.

I taught him how to prepare street cart chicken in a cast iron skillet, and how to boil rice, making sure to add the minimum amount of water, because you can always add some later if it’s too dry, but you cannot remove some if it’s too wet. I explained how to easily make meatballs (about the same ingredients as the meat sauce), and how to create simple hamburgers and grilled chicken, both of which rely on healthy doses of kosher salt and pepper, among other things.

I taught him how to make french toast and matzo brei, which are forgiving foods in terms of batter, and which can be sweetened and flavored any number of ways. 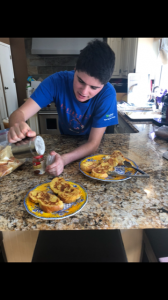 We discussed knife skills and repurposing leftovers, and cleaning up the messes we make as we go along (not a strength of mine, still). We talked about the ways to measure wet ingredients and dry ingredients and also not measure anything at all.

And before I knew it, we were standing in his empty kitchen in Ann Arbor, with nothing but the lessons behind us.

He’s been at school for about a week now, and he and his roommates seem ambitious and optimistic for 5 boys with little cooking experience between them.

We stocked his kitchen with equipment and his pantry and refrigerator with staples and with love. So far he has made eggs and pasta, and learned the hard way that chicken takes a long time to defrost. That’s ok. He will take it in as he goes, just like I did. I imagine he’ll become proficient in Kraft Macaroni and Cheese and salads that come pre-washed in a bag, and that he’ll take risks too and again try his hand at the complex prospect of meat sauce.

I showed him how to make the basics, and hopefully, I taught him how to cook with heart.

But then again, this was never really about cooking. It was about spending time with my son.

I can recall many horrible meals I’ve made in my life, some that go from the stove to the trash, like a bad movie that goes straight to video. But by far the best thing I’ve ever cooked is this boy (and his brothers). I made sure to season every layer along the way, I tried to add the correct amount of water, I sweetened him and salted him, never stopping to measuring any of these ingredients, and yes, I cleaned up the messes I made along the way. He has turned out to be, in my opinion, cooked to perfection, delicious in every respect.

So while you won’t find me with a headset on playing Fortnite, or enjoying football Sundays on the couch, I still have two more sons who need to learn the basics in the kitchen, and 3 sons who haven’t yet mastered the art of cooking and baking. Luckily, neither have I.

Lisa Goodwin, an attorney, writer, and blogger, has been guiding students through the college application essay process for years. From the Ivy League to the Big Ten, Lisa enjoys seeing her students gain acceptance to their top choices for both undergraduate and graduate programs. Both in-person and Skype appointments are available. Contact lisagoodwinwrites@gmail.com for more information. To read her blog, visit https://upwitscreek.wordpress.com.

Lisa is also happily married and a mother to three boys, who create endless material for her blog and her imagined stand-up comedy routine.