You are at:Home»Relationships»Family»My Adoption Reunion Story

I grew up knowing I was adopted. I accidentally found out at a very young age. I can remember seeing my original birth certificate on our dining room table. I asked my mother. “Who is baby Veronica?”

Later that day, my adoptive mother (Virginia Smith) told me the news. It was hard to swallow that I was not related to the Smith family. From this point on, I began a lifelong struggle with my identity. Although not every adoptee may feel this way for me it was a thirst to find out where I came from. Whose family was I supposed to be in?

Cathee Dahmen (my birth mother) gave birth to me in June of 1962. She was 16 years old at the time of my birth. I was born Veronica Rose Dahmen on 6/23/1962. I was nicknamed “Cricket” because of a funny sound I made as an infant. During the last few months of her pregnancy, Cathee lived at a home for unwed mothers.

Back in the day, women pregnant out of wedlock brought great shame to their family name. Cathee never really cared about what other people thought of her.   I have one photo of us together that I treasure deeply.   We bonded as mother and daughter early on. Cathee was still attending High School classes in Minneapolis. I was told she was a very good student and excelled in English and Art.

Though I am not 100% sure, I have been told that Cathee was struggling with the idea of adoption. I believe deep down, she knew that she was not able to provide the things I needed.  After I was born, that idea went out the window, and I came home to live with Cathee. I spent my first 11 months with her.

One day when Cathee went to her high school classes, her mother (my Grandma) packed me up and went to Catholic Charities and adopted me out. This was behind Cathee’s back. When Cathee got home from school that day her Mom told her “We got rid of Cricket.”

I can only imagine her emptiness inside after being betrayed by her own mother.

She was never able to give me a last hug or kisses goodbye. I was literally ripped out of her arms and she never had the chance to look back or say goodbye.  No embrace like moms often do when they are off to work, or plan to come back home, in a short while.

To this day I still feel day feel the imprint she left when we were separated. I will never know how deeply this affected Cathee. I have spent the rest of my life curious about my birth parents and what the circumstances could have been,  and why my family let go of my hand.

After the betrayal of her Mother, Cathee decided to move from Minnesota to Rhode Island, and finish high school. Cathee’s Uncle George Morrison was an accomplished artist on the East Coast. Cathee lived with George and his wife and their son Briand. Cathee posed for some of her Uncles acrylic paintings. One day a well-known fashion illustrator named Antonio Lopez viewed her uncle’s portraits and quickly asked who the model was. Antonio was working for Women’s Wear Daily at the time.

Antonio was well known in the fashion and modeling world and believed that Cathee would make a fabulous model, but she would have to graduate from Hope High School first. Antonio moved  Cathee to New York City where she lived with him and his partner Juan.  Once in New York, Cathee quickly began modeling for Harper’s Bazaar, Vogue, Elle and Brides magazines under the mentorship of Antonio and Juan. 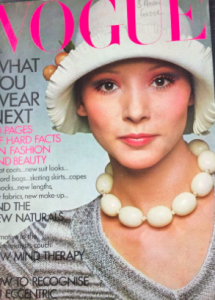 Fashion Designers requested Cathee to model their clothing lines. She had made her mark in history as a top model for Eileen Ford and Elite Modeling in the UK. She was also considered the first Native American Model. Her fashion career spanned 1967 – 1974.

When I turned 18 years old, I began searching for any family member  Minnesota, my home, is a Sealed Records State. Birth records cannot be unsealed.  I waited 22 years for someone, anyone, to find me.

In 2002, the Monday before Thanksgiving, a woman left a message at work looking for “Susan Fedorko” who was born in 1962, and who was adopted. I knew from that moment that it was me.

My mind was reeling.  I waited ten minutes before calling her back. This woman was my half-sister, the second daughter of Cathee! We conversed and made plans to talk to each other in the evening. I had a list of questions.

That evening I took the phone to a quiet place as I did not want any family members interrupting me. If for some reason someone was playing a cruel l joke on me, I did not want my family to hear my pain.

I was pleasantly surprised that my sister (Sarah), had her half-sister Laura on three-way conversation. I was elated to finally hear from both sisters. I kept thinking these are my long lost sister and I am the oldest one now.  I thought about the time lost with both of them. I have grown up and everyone missed it.

Cathee died in 1997 of COPD. My sister Sarah had asked me if I knew the name Cathee Dahmen and at the time I didn’t.  Sarah explained that are mother was a huge  model.  Sarah eventually told me about my biological father Thomas L. Conklin. He passed away 2002 of stomach cancer. Later on I connected with the Conklin side of the family.

In one phone call, I instantly gained six new siblings. I have experienced tears of joy and sorrow with the reunion. Discovering that both biological parents were gone left me with an empty hole.  All that I have left is the bond with the immediate family they both cherished,

It has been 17 years since I was located.  I have learned so much about both Cathee and Tommy. It has been a strange discovery to learn why I have some of the same quirks as my parents did. Discovering features that my mother and I possess. I also see how both of my daughters take after Cathee,

Forgiveness has been extremely hard on me. It is hard to accept she moved on without me. The very reason I was adopted out, was because she would be unable to support me financially and emotionally. Five years after I was gone, however,, she was comfortably secure and living on her own.   My pain has always been with my grandmother who adopted me out. How could a grandmother do this to one of her own granddaughters? Forgiving my grandmother has been difficult. It was not her role to play “God” with me.

I hope that she is able to see the beautiful successful woman that I have become. I hope she is proud of my beautiful girls. I have always told myself, if and when I ever get to heaven, I will walk right past my grandmother.

A lifelong resident of Minneapolis, Minnesota, Susan “Cricket” Fedorko (Grand Portage Band of Chippewa – Oijbwe) has contributed her writing to four anthologies on the subject of being adopted and has done numerous media interviews. This new memoir details her astonishing 22-year search for answers and describes touching reunions with both of her birth-families in two Minnesota tribal nations. Her Chippewa – Oijbwe, birthmother, a famous supermodel, died in 1997, a short distance from Susan’s current home.

A Memoir of Adoption Susie always knew she was adopted out at the early age of 11 months. She discovers at the age of 40 who her biological family is. Susie discovers her birth mother is the first native american supermodel “Cathee Dahmen”. This is her story: