You are at:Home»Relationships»Family»Our Dog And The Thanksgiving Turkey

Our dog helped save us, but he did not want to save the turkey on Thanksgiving.

Getting our adorable little dog truly helped my daughters and me after my husband’s sudden death in 2011. Four months after he passed away, I acted on impulse and decided to get a dog. We named him Bruce, for Bruce Springsteen, a favorite of my husband’s.

A dog is something I did not grow up with so this was uncharted territory for me. I knew that he was going to be an added responsibility for me on top of very recently becoming a solo parent. My hope was that the joy a dog would bring would outweigh the responsibility, but I could not help being nervous.

Very quickly, I was able to see that I was correct on both accounts.

The work that came with this little white ball of fluff pretty much fell on my shoulders. My daughters helped a little but I did almost everything for him. Now that my girls are off in college, this has changed from almost everything to absolutely everything.

The love that we get from Bruce is indescribable. He is one hundred percent worth the work. After my husband’s death, our house seemed dark and sad. From the moment Bruce arrived, our home became lighter and happier. No matter what kind of mood you are in, it is hard not to smile when you walk through the door and an adorable dog greets you as if you are the best person on the planet.

Having never had a dog before, I did not know what “normal dog behavior” was. It turns out that Bruce is a little less than normal. 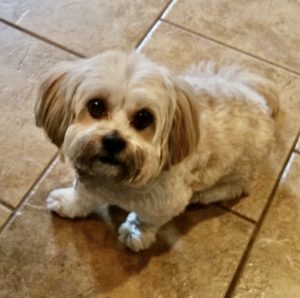 We did attempt to train him in the beginning but that did not go well. He was resistant and, to be perfectly honest, I did not have the strength back then to try too hard. So we let him be who he is.

Bruce is quirky, to say the least. He is terrified of almost everything, especially rainstorms and loud noises. My little 12 pound dog thinks it is smart to try to attack German Shepherds and Huskies. He looks like a lap dog but he does not like to cuddle at all. What he does like to do is follow me everywhere I go, including the bathroom. He also does not enjoy people he doesn’t know.

This little dog is also very spoiled, which is my own fault. I have somehow revolved my days around him and his schedule. We also constantly give him people food.

His quirkiness gives us reason to smile and sometimes even laugh hysterically.

One of those occasions was our dog at Thanksgiving dinner, which I host every year. It is one of my favorite holidays. I love to cook with my daughters and have extended family at our house.

Bruce, on the other hand, does not enjoy this holiday at all. He hates crowds and commotion in “his” house. It makes him agitated and nervous and he tends to hide.

A few years ago, he did just that. He went into a corner and was nowhere to be seen when we began to eat. As we sat in the dining room eating and talking, we had no idea what was going on in the kitchen.

Eventually, I got up and went into the kitchen to get something out of the oven. What I saw when I entered was that my little white ball of fluff had somehow gotten himself up on the counter and was making a meal of the turkey carcass.

Our dog decided to have his own Thanksgiving.

When I shouted, “Bruce!” everyone got up from their seats and ran into the kitchen.

Bruce knew he was doing something wrong and that he had to get off the counter. The funniest part? He decided to take the turkey carcass with him, dragging it across the counter.

After I stopped laughing, I took it away and picked him up. He actually seemed annoyed that I interrupted his very delicious dinner.

Bruce brings so much joy and laughter into our home. He may be spoiled and quirky, but I would not trade him for the world.

On Thursday, I will make sure to throw the turkey’s carcass away after it is sliced.