You are at:Home»Relationships»Friendship»Friendship Can Light The Darkest Hours

This week’s article was slated to be about my mandatory silence brought on by throat surgery last week. Even while I was recovering from a very complicated and painful knee surgery the week prior, I thought it would be cool to write about what it’s like to be nonverbal in a world of chatter. I even created a title for the article before I hobbled into the hospital on my one good leg, prepping for anesthesia to be administered the second time in one week.

If anyone saw our Facebook and Instagram videos on Monday, I used signs instead of words to express this week’s happenings at Living The Second Act. Like I said, I wanted to chronicle my mute rollercoaster ride. To extrapolate on the kind of fortitude it takes not to speak when spoken to. I was determined to focus on the experience of dealing with illness. It would be, I so eagerly thought, a cathartic way for me to heal by sharing insight with you, our readers.

But then something unexpected happened. Something much bigger than my swollen knee, the bruises in my IV-poked veins and my instructions to not speak a word for eight days. I saw a Facebook post by one of our writers, Jen Marks Salk.

“You never know what someone’s going through. Be the beauty in their life today.”

With that inspiration, my article took a different turn. Right in the direction of love and kindness.

Life is really like an onion, as Carl Sandburg wrote. My onion has a hard layer on top — I call that the shit that has been hurled in my direction. Peel away the flaky smelly green stuff, however, and suddenly it’s all sweetness — it is the people – my people – with a giant safety net. Lifting me up, making me whole again. It’s the beauty Jen wants us all to be.

Text after text. Baked goods and soup. A white board and a bell. A borrowed Peloton. A disc filled with movies. Flowers and balloons. A ten-course dinner of Greek food. A plastic screaming goat.

Telling me your problems like it was a normal day. Coming to visit and being kicked out when my pain became unbearable. Sitting with me when I couldn’t utter a word. Jumping in my bed so I didn’t have to move.  You were there, my little army. My friends. My family. You are the stem of my onion, the soft part in between. Your ability to help is endless; your idea of friendship is limitless. 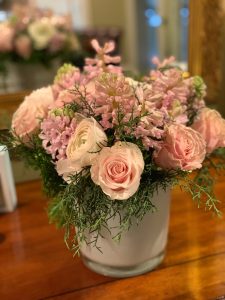 Before my two surgeries, I feared that the no-workout, no-speaking new normal would pull me into a rabbit hole. I have always been defined by both, in different ways.  I have also seen the inside of a rabbit hole, have you?  It’s a “pull the covers over the head and not see the light that the new day brings” kind of place. It’s a one-way ticket to a dusty dungeon. As The Boss says, it’s a deathtrap, a suicide rap.

I was prepared and not prepared. I had pep talks with friends and with myself. Stacy knew it was coming and that we would communicate about Living The Second Act nonverbally and be just fine. I was ready but I wasn’t. The rabbit hole loomed. The ghosts of my complicated family and friends who had recklessly abandoned me threatened to visit in the darkness.

But the soldiers stood guard, never falling out of step. My children with their incredible capacity to love me through words, gestures and even flowers. My husband who held my hand in the hardest of moments, a mother-in-law who flew thousands of miles to make me pea soup and pudding. And my ridiculously unwavering army of friends whose ability to love and care, in sickness and health, is unparalleled.

I hope I never have to repay any of them for bringing this light into my darkness. I hope they remain healthy forever. If they ever do, however, I will light a torch so bright it will keep them from falling down the rabbit hole. I vow to be the beauty I now know they will desperately need. 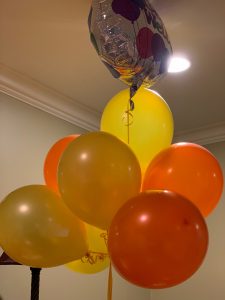