You are at:Home»Relationships»Family»How I Was Meant To Be The Mom I Am

My twins were created 10 years ago today.

In a little plastic dish that now sits in a box of keepsakes in my basement. I’ve never really talked about it before outside of my close friends and family. It was back during a time when back-to-back miscarriages left me thinking I was only going to be the mother of one little boy, who was just 2 years old. My late husband Matthew and I thought how great it would be to have a brother for him. Neither of us had brothers. We both always wanted a brother.

But sometimes what you get in life is nothing like you imagined, but always meant to be.

After figuring out that anti-rejection meds and immunosuppressants for kidney transplant recipients like my husband will do quite a number on the reproductive system, we reached out for help. We were now even more thankful at the fact we had our son –amazingly conceived on the first try after drinking too much one night five years into our marriage. (They should put that in fertility brochures: “Go drink your face off and have fun with each other. It works.”)

After months of shooting myself in the stomach with drugs (actually since I’m deathly afraid of needles, I’d turn my head as Matthew iced my belly and stuck the needle in –something he took way too much pleasure in) my uterus was ripe for the pickin’. On that morning we went to the clinic, after all the papers were signed and we were scrubbed and prepped, I remember telling my husband whatever we created, we were going to do our best to bring to life. Nothing was going to be left behind. No matter 10 or one or none. Whatever we got was meant to be. 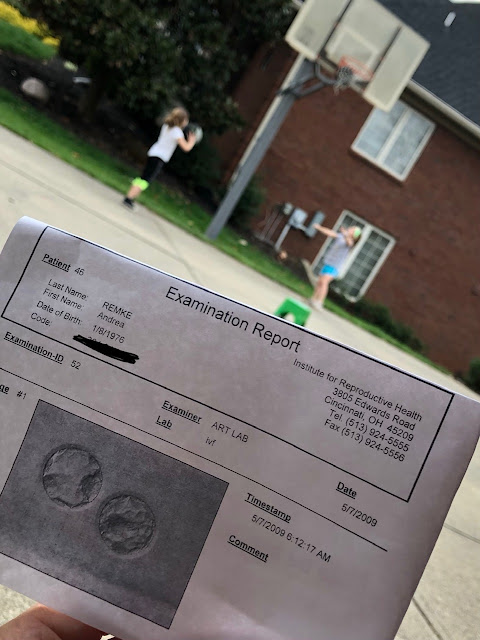 I woke up groggy from the extraction process. Matthew’s process was… um… easier than mine, let’s just say. We had years of jokes about that one, but I know some things are better left unsaid (I can’t believe I actually just said that). They told me to take it easy and rest that day. We left for Churchill Downs and attended the Kentucky Derby with friends instead. And as thousands of people around us cheered for a Derby-winning horse named Mine That Bird, I was giddy inside at the thought of what might happen to us that Christmas.

Long story short, we got three good ones that they implanted a few days later. Two of them took. They gave me a piece of paper –an examination report that showed two blobs –two clumps of billions of cells. And they sent us on our way. With just a picture of those two blobs.

Our son never got the brother we wanted for him. Despite my adamant prediction for two boys, the heavens turned those blobs into two amazing girls born just after Christmas –who couldn’t be any more opposite one another. I was a mother of daughters now. “Lord, what the hell are you doing up there?” I asked (usually at 3 a.m.). A while later, our frozen cycle was implanted but none took. It seemed as if we were done, they said. There would likely be no other way to conceive. We were done.

But we all know that sometimes “fooling around and having fun” can trump any medical prognosis you’ve been given by one of the country’s top OBGYN/fertility specialists. And so one Fifty Shades of Grey trilogy and zero medical interventions later, our youngest daughter joined the family, to the home she always belonged to.

As Mother’s Day approaches this year, I exhaustedly celebrate being a mother of four. This little piece of paper reminds me that the plans I make are never as exquisite as the ones already designed for me. Despite what I’ve lost recently, I stare in awe at what I still have –what I wouldn’t deserve in a million years –the son who brilliantly came to us first, the magnificent girls that only a blink ago were those blobs in a petri dish, the baby girl who we never knew could be but became.

Plans and designs, worries and doubts, miscarriages and births, failings or winnings. They’re all just meant to be. 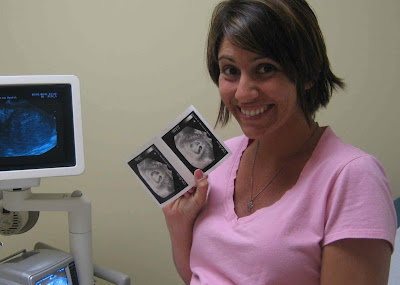 Andrea Remke lives in Northern Kentucky. She has a degree in communications and journalism from Saint Mary’s College, South Bend, Ind. She is a recently widowed mom to an 11-year-old, twin 8-year-olds, and a 6-year-old. She is a freelance writer and blogs at www.kymomtotwinsandmore.com. Find her on Facebook and Twitter @andrealremke.